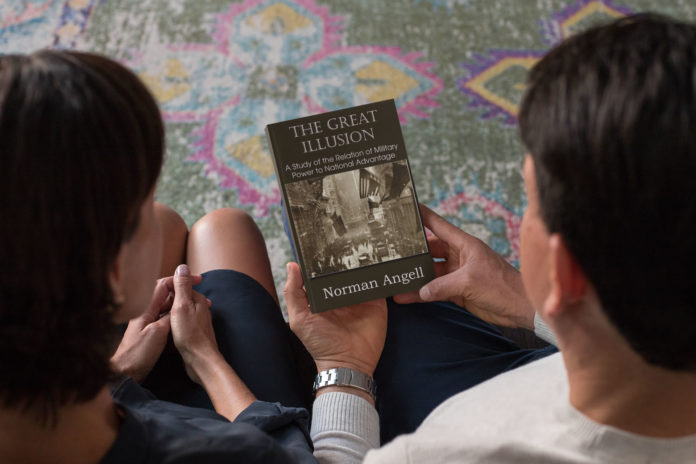 The Great Illusion by Norman Angell, published in 1910, is one of the most interesting humanities and social sciences books you could ever read. The book gives you a taste of what economic power is all about as well as military dominance. As if forecasting the emergence of World War I, the author makes interesting points regarding what makes a country a superpower. Reading this book gives one clue on how the United States might have made it to the top. Would we continue being the most powerful nation on earth or will countries like China soon topple us over? The author further explores the morality of a civilized nation conquering another. This is an important discussion given that America has military bases in almost every part of the world.

First published in the United Kingdom in 1909 under the title Europe’s Optical Illusion, The Great Illusion underwent numerous republication and enlargement. The 1910 version, which is the version currently being reviewed, holds that the American interest in the problem discussed herein is as important as that of Europe. The author, Norman Angell, asserts that America would not have been ready to handle the problems arising from association with Spain, Japan, and the Philippines unless it understood the principles discussed in the book.

The main principle in this book is that the economic interdependence between countries in Europe made it practically impossible for a major war to break out. And if that were to happen, the war would not last long enough. Having been such a respected member of the British Parliament and winner of the Nobel Peace Prize in 1933, Angell is today remembered for the disillusioned The Great Illusion because the war eventually happened. The countries descended into chaos by 1914, affirming that formal education cannot be construed to be an actual reflection of reality.

Throughout his thesis, Angell never said that war cannot happen. He often used the term that war is futile. However, history places him as having said it cannot take place. This is the kind of misunderstanding that makes most critics regard some of the author’s observation as being disillusioned. The criticism was even stronger when World War I happened. The reality of the matter is that Angell was pretty clear about his assertions. He wrote: “War is not impossible…” and that no responsible pacifist can confidently term war as an impossible occurrence.

Angell had a colorful career. However, he ended up spending a better part of his time explaining his views. He would later on say that he is tired of shouting himself as he tries to explain the foolishness of war.

The author was often misquoted by mainstream media. In 1915, the New York Times ran a report that Angell had been embroiled in writing hopeful books regarding war. The report claimed that his books proved modern economic times made war an impractical happening. However, it seemed never to agree with Angell’s observations. The New York Times considered the early 19th century to be one of the periods when nations could easily conflict. Thus, the newspaper did not have so many kind words for Angell.

It did not take long before the revered author responded to these criticisms. He categorically stated that he has never written a book in which he says the war has been made impossible. He continued to observe that violent wars have been around even at the time when the book was being written. And that they will continue to rage long after the book’s publication.

Power in international relations takes different forms. From the modern perspective, it is generally regarded in terms of state power. This is described in the form of economic and military power. The different nations in the international system take various descriptions including superpowers, great powers, regional powers, middle powers, and small powers.

The United States had not yet become a world superpower by the time Angell wrote The Great Illusion. Our economy was indeed by far the most productive by 1890. We produced twice as much as Britain, our closest competitor. But we were not great in terms of diplomatic or military power. Our army was less than 30,000 men while the navy was barely 10,000 seamen. Britain army, on the other hand, was five times bigger than ours. One major thing that contributed to our army not being that strong was our neighbors. We were covered by two large oceans while the neighboring nations were either friendly or weak. With no serious military threats and less interest to assert military force overseas, it made no sense to expand investment in the military.

Angell asserted that becoming a superpower would be determined by your economic interdependence. However, these assertions would soon be squashed by the 1914 First World War. A few months after the war came to an end, most Americans began asking questions. Britain was still the dominant nation, controlling most parts of the world. Germany wanted this kind of control. What about the United States? That was a question that took the center-stage in most political debates. It appalled the likes of Theodore Roosevelt and Wilson.

The Making of a superpower

Technological advances, industrial production, and increasing the military size played a major role in that.  It did not take long before power started tilting from Europe to America. The belligerents were no longer able to sustain the cost of war. This is exactly what Angell had warned in his book but was cast aside. As a nation gets involved in a war, most of its resources are wasted and productivity diminished. The end goal is a state of economic destruction, making it less viable to launch more offenses. In the case of Germany, the country was cut off from international trade. This forced it to scamper into a defensive siege, focusing most of its attacks on weaker nations such as Romania.

Throughout World War I, America seems to have taken a stand that Angell easily agreed with. That is, never taking sides. Rather, the country focused on military production to meet the demands for war machinery by the conflicting parties. At the same time, farmers planted more food to feed the combatants. President Wilson often used the phrase “peace without victory” to describe America’s approach. Such happenings were in line with Angell’s perspective, who believed that military prowess is obtained through industrial advances.

The author never saw the need for countries to get involved in the war. He asks: “If England were to conquer Germany tomorrow…. Would the ordinary British subject be the better for it?” He also asks the same question, from the view of Germany completely conquering England.

This underlines the fact that not so much good can come from war. Focusing on economic advances is the best thing to do. If Norman Angell were to write the book today in consideration of the Chinese factor, he would have a lot of talking points. China has steadily risen to a world power thanks to economic advances. The country heavily lends to African countries and other third world nations with the view of increasing their infrastructure. In return, these countries enter into trade deals with China, most of which are becoming a threat to America’s position overseas.

The United States understands that if it fails to take action now, it would soon be wondering how the nation lost its title as the world superpower. That explains America’s recent embargo against China. The two nations are embroiled in an economic cold war and the winner is sure to emerge as the world’s leader. Things currently seem to be in our favor, considering that we are still in control of the technologies that power most of the world’s economies.

But even as we emphasize the need for economic dominance, Norman Angell still maintains that wealth, prosperity, and well-being of a nation are reliant on military power. However, that does not mean that one nation should grow by conquering another. A civilized nation immediately loses its morality when it does so, the author argues.

In my opinion, Angell used to overthink his arguments. This is the kind of approach that left him exposed to the possibility of distortion. A keen analysis of The Great Illusion shows that its principle was presented in such a loose and alarmist language. This led many to wonder what ‘illusion’ was being discussed. For some, it was the economic-rationality of the 20th century. Others considered it to be its likelihood or possibility.

Angell was not just faced with much criticism due to his problematic language. Even his sworn defenders admit that the author occasionally had misjudgments, which would yield concrete mistakes. For instance, Angell is cited to have wrongly deprecated the essence of power in international relations. He at one time said that European powers would never be involved in war again. Even though this was proved wrong, he was justified by the fact that Germany ended up finding it hard to sustain the war.

The Great Illusion is one of the most eye-opening books one can ever read. The book not only handles economic matters but also has a detailed discussion on war and military dominance.

Cosmic Consciousness: A Study in the Evolution of the Human Mind by Richard Maurice Bucke

Relativity: The Special And The General Theory by Albert Einstein

ClassicBooks.com - August 5, 2020
Relativity: The Special And The General Theory by Albert Einstein started as a series of short write-ups, but was eventually converted it into a...

The Birth and Death of the Sun by George Gamow

Little House on the Prairie by Laura Ingalls Wilder