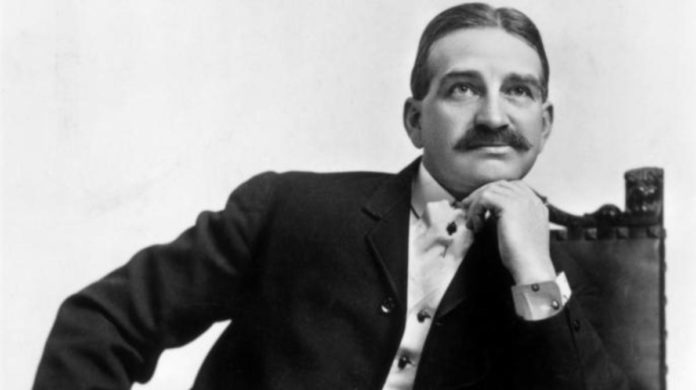 Lyman Frank Baum rose to fame due to his brilliant publication of children’s books, especially The Wonderful Wizard of Oz. Having become such a success, Baum wrote more series under the Oz title. The series was continued, paying close attention to mysterious objects and events in order to intrigue children to read more. Baum’s unique ability to think out of the box made him direct his characters as he pleased. Reading the book makes you feel as though you are in the story, experiencing what the likes of Cowardly Lion, Dorothy, and Scarecrow of Oz are witnessing. He breathed a new life to fairy tales and this went a long way in earning him recognition.

Frank L. Baum was born on May 15, 1856 in Chittenango, New York City, United States. As the seventh-born of nine children, he was brought up by a strict Methodist and highly-successful entrepreneurial father and mother. Only five of his siblings survived to adulthood. Even though Baum took the name of his father, Lyman, he preferred to be called Frank.

When he was 12 years old, the soon-to-be famous author would attend school at Peekskill Military Academy. He described his time at the school as being miserable for he was often disciplined when caught daydreaming. No amount of punishment would make him stop.

Baum started writing at an early age, a fact that motivated his father to buy him a cheap printing press. He worked hand in hand with his younger brother, Henry Clay Baum, to produce The Rose Lawn Home Journal. Henry and Baum published many other journals together. By the time he was 17, he setup an amateur journal that he referred to as The Stamp Collector. He had many other journals under his name.

Baum’s official entry into writing as a career started with the establishment of a newspaper which failed in 1897. In the same year, he published Mother Goose in Prose which comprised of Mother Goose rhymes. This became moderately successful and gave Baum the chance to quit his sales job and concentrate fully on writing. Two years later, he worked in collaboration with W.W. Denslow to publish Father Goose, His Book, which comprised of nonsense poetry.

In 1900, Baum published his signature book, The Wonderful Wizard of Oz. The success of this book became unmatched and it gave him significant financial breakthrough. He wrote several other Oz books, a total of 14. His final one was Glinda of Oz that got published in 1920, one year after Baum died in 1919. Ruth Plumly Thompson continued with this series, adding twenty-one other Oz books.

There are some works that the famous author did not use his real name. In most cases he would use a pen name to avoid a pre-made public perception of the writings. Edith van Dyne was a popular one, which he used in the Aunt Jane’s Nieces series.

Baum was married to Maud Gage, the daughter of Matilda Joslyn Gage. The two would occasionally go for book tours together. While touring with The Maid of Arran, the theatre in Richburg burnt down, destroying a parlor drama by the name Matches.

The author not only produced great novels but also a series of short stories which are characterized by his imaginative nature. There are a wide range of stage versions for his numerous works too.

An Autobiography Or The Story Of My Experiments With Truth by...

ClassicBooks.com - August 10, 2020
An Autobiography Or The Story Of My Experiments With Truth by Mahatma Gandhi is an introduction to India’s nationalist and most complex historical figures. The...

ClassicBooks.com - August 6, 2020
Sir James Hopwood Jeans is one of the most highly acclaimed astronomers, mathematicians, and physicists, for he was the first to propose the notion...

Of Mice and Men by John Steinbeck

To Kill A Mockingbird by Harper Lee